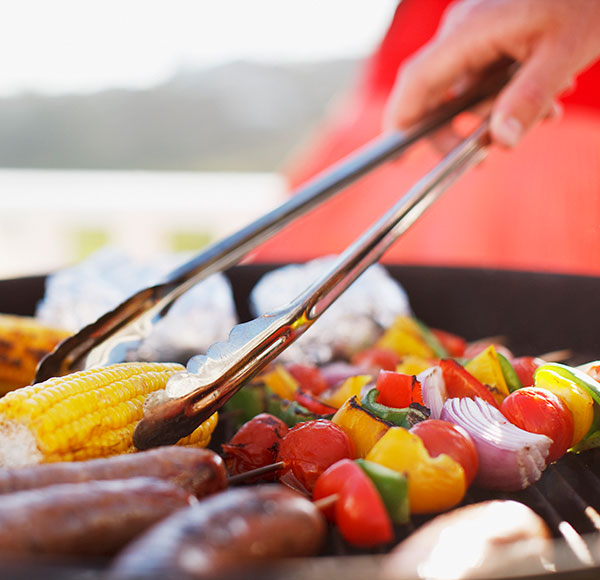 Next level BBQ — 4 of 6
Previous Next
Now Reading: On the BBQ

Move over meat! Fruit and vegetables are taking their well-earned place on the BBQ this summer and there are plenty of ways to introduce these sweet, tart and aromatic flavours to your grill. Check out our handy how-to guide for cooking fruit and veggies on the BBQ and get more out of your barbie this Australia Day.

A foolproof way to add serves of fruit and veg is to add them to bamboo skewers. First, soak your skewers in hot water a few minutes. This will stop them from burning. Then choose a combination of fruit, veg and meat, pierce them with the skewers and place on the grill – turning every few minutes until cooked through. Always cook the skewers on the grill rather than the hotplate, allowing any excess fat to drain away.

Making your own burger patties gives you control over the flavour, and means you can inject some extra serves of veg too, which is not only good for you, but it’s a great way to keep costs down. Start with lean mince. You can try the traditional lamb or beef, or get adventurous with turkey or even tofu. Then add your extras – like grated carrot, celery, onions, minced garlic, beans or lentils, eggplant, wilted spinach plus plenty of herbs and spices.

If you’re choosing store-bought patties, be sure to choose the ones with the highest Health Star Rating.

With plenty of direct heat, a BBQ with a cover is the perfect place to cook mouthwatering and flavour-loaded pizzas. Use pita bread as a base for a quick and easy short cut, then add lean meat, lots of vegetables and a sprinkle of reduced-fat cheese.

Check out some of our pizza recipes such as the tropical, veggie and chicken 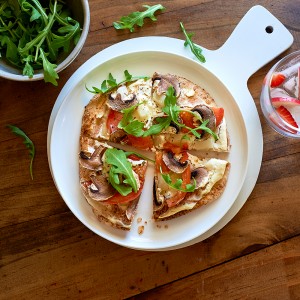 Cut the capsicum into strips, remove the seeds then brush with olive oil. Place on the grill for 6 minutes – or until the skin is blackened. You can serve them as is, or place them in a sealed plastic bag for a few minutes to steam – which makes the skin easy to remove.

Brush a large Portobello mushroom with a mixture of crushed garlic and olive oil, then place on the grill for around 8-10 minutes or until soft. Slice after grilling. Smaller mushrooms can be kept together on skewers (grilled for about 3 minutes each side), or cooked in aluminium foil packages with rosemary, olive oil and garlic (8-10 minutes).

Corn on the cob

Strip away the husk and brush the kernels with olive oil. Turn the corn occasionally over a medium heat. You’ll know the corn is ready when there are caramelized brown spots, but the majority of the corn is golden. Try our corn on the cob recipe and season with pepper or chilli, or add a sprinkle of paprika and parmesan cheese. 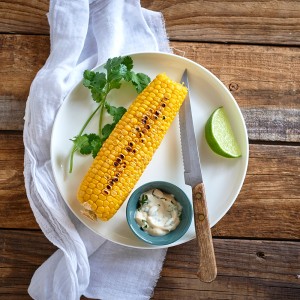 Slice lengthwise into ‘steaks’. Then brush with olive oil and place on the grill for 4-5 minutes each side or until tender.

Cut lengthwise into halves. Brush with olive oil and sprinkle with pepper, then grill each side for 5-8 minutes, or until tender.

Scrub a large potato and make four slits almost through to the bottom. Add a light covering of olive oil, and place sliced onion inside if desired. Add seasoning to taste. Wrap the potato tightly in foil, then place the package on a rack in the BBQ and close the lid. In a hot BBQ, they should be soft and ready to eat in under an hour. To reduce BBQ time, microwave them on high for 5 minutes before wrapping in foil and placing on the grill for 15-20 minutes. Serve with reduced fat sour cream and diced chives.

Cut peaches in half and remove the stone. Brush the inside with olive oil, then place them directly on the BBQ on medium heat for about 5 minutes, or until they’re soft. To use as a simple dessert, add a sprinkle of cinnamon and serve with reduced-fat greek yoghurt.

Remove the skin, then cut the pineapple lengthways into spears, discarding the core. Grill pineapple for 2-3 minutes each side, or until grill marks appear. For a Brazilian twist, sprinkle with ground cinnamon and brown sugar before you grill. Or, why not try our caramlised pineapple and spiced ricotta recipe. 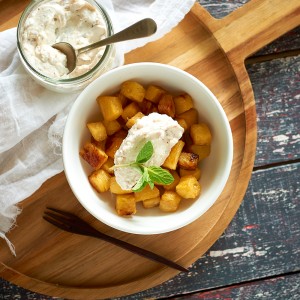 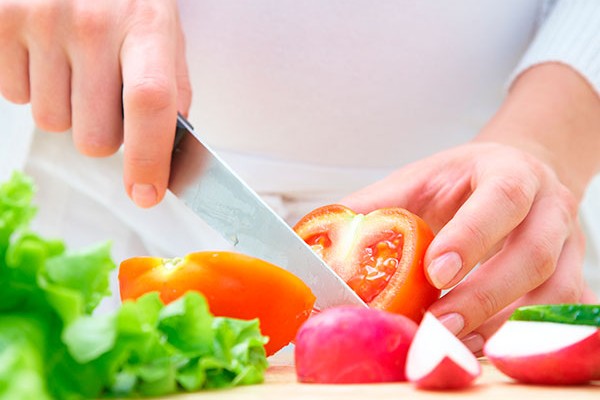 Next level BBQ — 4 of 6
Previous Next
Now Reading: On the BBQ